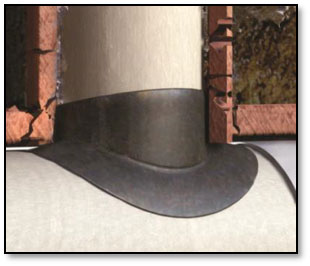 Ottawa, IL, November 30, 2015 – Recent rulings of the Patent Trial and Appeal Board (PTAB) of the United States Patent and Trademark Office have no impact on the continued validity of the fundamental patent claims surrounding LMK’s commercial embodiments for the Insignia Seal™. LMK, in fact, prevailed on petitions filed by BLD on patent claims surrounding LMK’s commercial embodiments for the Insignia Seal™. Specifically, claims covering the Hydro Hat™ remain 100% intact and valid following BLD’s multiple unsuccessful challenges to LMK’s patent claims. The PTAB also determined that some of the claims of U.S. Patents 7,975,726; 8,667,991; and 8,667,992 were unpatentable. However, those patent claims are not focused on the Hydro Hat™ sealing gasket, but primarily describe materials and methods that are not practiced by LMK. LMK remains committed to the Hydro Hat™ gasket because of its superior performance. Importantly, patent claims covering LMK’s Hydro Hat™ are still considered valid and enforceable, and the technology is very valuable to utility owners and their rate payers.

As a result of the PTAB’s decisions, nothing changes for LMK’s patented cured in-place pipe processes, and BLD cannot

practice the use of the Hydro Hat™ sealing gasket without infringing LMK’s patent rights. The materials supplied by LMK and installed by licensed LMK contractors are the same high quality products today as they have been for many years. The Insignia Gasket Sealing System remains the most advanced long-term watertight CIPP sealing solution available in the market today.

LMK’s patented Hydro Hat™ gasket is specifically designed and engineered for sealing the unique shape of the juncture between two pipes and provides a positive compression seal. The molded Hydro Hat™ gasket consists of a 3″ brim seated against the mainline pipe and extends up into the lateral pipe forming the ultimate seal at the weakest and most critical location in a collection system. Gasket Sealing Technology raises the bar for the trenchless industry by providing a gasket seal for rehabilitated pipes just like that of a gasket found in new pipes, making CIPP a true trenchless watertight alternative to new pipe.

LMK Technologies has been the innovation leader in the pipeline rehabilitation industry since 1993 and has over 125 worldwide patents. LMK’s President and Founder, Larry Kiest, is thankful that the PTAB proceedings did nothing to alter the most important aspects of LMK’s patent rights — patent claims directed to the Hydro Hat™ gasket. “Our Insignia™ gasket sealing technology with compression gaskets located at service connections and manhole connections provide a total sealed system and making CIPP a true trenchless watertight alternative to new pipe is a big win for the industry.”

“Our mission has never wavered,” Kiest added. “Through innovation and adherence to industry standards, we provide the nation’s sewer utilities and their rate payers with the highest-value, most cost effective long-term trenchless solutions.”

The decision by the PTAB is not a final ruling, and the patent infringement lawsuit filed by LMK against BLD Services is still pending in the Federal District Court for the Northern District of Illinois.

LMK is the leading trenchless technology provider, as well as a manufacturer of liner materials and equipment, for the pipeline rehabilitation industry. LMK serves the municipal and residential market through a large network of licensed and factory trained contractors and installers. For more information regarding LMK’s Insignia™ Gasket Sealing Products, T-Liner® Main-to-Lateral Lining System, Performance Liner® Lateral Lining systems or to obtain a listing of the independent municipal contractors who install the T-Liner lining system visit www.lmktechnologies.com, call 1- 815-433-1275 or email info@lmktechnologies.co.